Warning: count(): Parameter must be an array or an object that implements Countable in /homepages/46/d383856801/htdocs/rickyscustomcarts.com/wp-content/themes/enfold/config-templatebuilder/avia-shortcodes/av-helper-masonry.php on line 352

A few words about us

Let us introduce ourselves 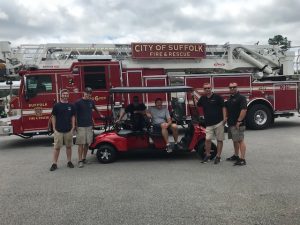 RCC has been serving the Hampton Roads area for 12 years, with over 80 years combined experience. In 2006 Ricky decided to customize his basic golf cart. After Ricky built his first cart, he started building carts in his spare time. It did not take long for Ricky to turn his hobby into a business. In 2008 Ricky opened Ricky’s Custom Carts in the heart of Suffolk. Later that year RCC became the Ez-Go Dealer for the Hampton Roads area, selling New and Used golf carts. In 2012 RCC expanded their dealership and also became the Yamaha dealer in Hampton Roads.

RCC is well known for their Customer Service and Attention to Detail. Ricky and all of his employees make sure that they treat every customer the way they would want to be treated, and build every cart as if it was their own. This is very important to Ricky, because he knowns that this is what has got RCC where it is today. If you can Dream it, we can Build it.

Although RCC is an Ez-Go and Yamaha dealer, they also sell Club Car golf carts gas and electric. RCC stocks hundreds of OEM and aftermarket parts for Ez-Go, Yamaha, and Club Car in their parts dept.

At RCC they don’t just sell carts, they also service them. If you cannot get your cart to them, they will come to you. RCC has a mobile service tech that will come to you for all of your golf cart repairs.

What Our Customers Say

The opinions that really matter

I went to Ricky’s based on the recommendation of my friend who purchased a cart here. They were super friendly and easy to work with. In addition they stand behind what they sell. I needed to have my cart serviced and in the process they discovered a part that was bad. No questions asked they fixed it free of charge. I would absolutely recommend Ricky’s if you’re in the market for a cart. Best in town!

We’re in the large format printing business and handle the signage for many big events in Hampton Roads. Navigating large event sites with all our tools and installation products can be cumbersome. Many parks and event venues prohibit trucks on the grounds to avoid grass damage. The perfect solution? A golf cart! We visited a few local shops and were not happy with the selection, quality and especially the custom service. Finally, someone recommended RCC and our search was over. I spent more than an hour on the lot going over our questions and requirements. Never once did we feel rushed and the carts spoke for themselves. Our cart turns heads as we work our events and has been a great asset to our business. RCC has a customer for life!

If a Picture’s worth a thousand words